Long time Los Angeles lawyer Ronald L. M. Goldman announced his retirement last week after reaching the milestone of 60 years in the practice of law. Mr. Goldman, who held the positions of vice president and senior trial attorney at Baum Hedlund Aristei & Goldman (now Wisner Baum), has been a pillar of Baum Hedlund for 19 years.

“Ron has been many things for the firm over the last 19 years,” says Michael L. Baum, former managing partner at Baum Hedlund Aristei & Goldman. “As a litigator, he led several of our most important and historic cases throughout the 2000’s and 2010’s and was someone that opposing counsel both feared and respected. But it’s not just about the case results; what made Ron unique was the way he went about obtaining justice for clients, always with a level of professionalism, class, and sincerity that is hard to come by. That’s why so many of our younger attorneys sought Ron’s counsel, as he graciously mentored them with the steady, sage wisdom that comes with 60 years of experience. We are very fortunate to have had him on our team and benefit from his legacy of success. We wish him nothing but the best as he turns the page on a storied career.”

Born in New York, Ronald L. M. Goldman has spent most of his life in Los Angeles. He attended Hollywood High School, and as a teenager, worked at the Hollywood Bowl handing out programs to make extra money. CBS Sunday Morning recently featured him in a story about the Bowl, “The Hollywood Bowl Celebrates 100 Years.”

Ron graduated from USC Law School in 1962 and was admitted to the California Bar in 1963. After taking on his first aviation accident case in 1969, Ron would spend the next few decades establishing himself as a leading aviation accident attorney. He represented airline crash clients in cases stemming from the 1972 British European Airways crash near London, the 1978 Pacific Southwest Airlines Flight 182/Cessna 172 Midair Collision at San Diego, California, the 1986 Aero Mexico Flight 498/Piper Midair Collision at Cerritos, California, and the 2000 Southwest Airlines runway accident at Burbank, California. He also served on the Plaintiffs’ Executive Committee in the September 11, 2001, aviation (passenger) tort litigation.

Ron’s passion for aviation drove him to obtain his pilot’s license in 1980. At the time, his case work in general aviation cases involving small planes and helicopters was growing. He successfully took Bell Helicopter to trial in Los Angeles, on behalf of three paramedics who died in the March 23, 1998, Bell 205A1 medical helicopter crash in Griffith Park (Los Angeles) while in the process of airlifting a child to Children’s Hospital Los Angeles. He also litigated more than a dozen cases against Robinson Helicopter and became a sought-after legal expert in the media following Robinson crashes. 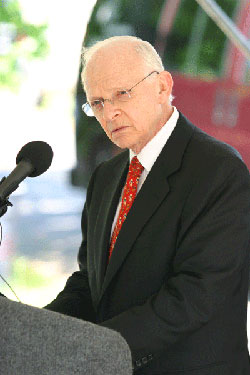 In 2003, Ron joined Baum Hedlund as a named partner with a leadership role in the firm’s transportation department. One of Ron’s crowning achievements came after the January 8, 2003, Air Midwest Flight 5481 crash in Charlotte, North Carolina that killed all 21 people aboard. Ron led settlement negotiations, which culminated in an agreement where the airline and maintenance company, in an organized ceremony in 2005, agreed to deliver an unprecedented official public apology to the families for the crash.

Three years later, Ron and the firm’s clients appeared in a dramatic reenactment of the crash, its subsequent investigation, and the ultimate public apology, which aired on National Geographic Television. Ron made numerous media appearances to discuss the crash and the apology, including an Audible interview for the series “Say You’re Sorry.”

To commemorate the 20th anniversary of the fatal crash, Ron issued the following statement:

“The 20th anniversary of the tragic Air Midwest 5481 crash is an opportunity to reflect on the ongoing fight for aviation safety. The lives lost, and the loving memories of each precious life, continue to spur our efforts. We believe that, out of this disaster, aviation safety has taken a step forward, as our work has led to concrete training and staffing improvements in maintenance shops. Those improvements are part of the legacy of all those touched by Flight 5481, and I am honored to have played a part in it.”

Ron led or participated in hundreds of aviation cases in private practice and at Baum Hedlund Aristei & Goldman. His work helped the firm recover more than half a billion for clients in aviation accident cases.

Southern California Super Lawyers magazine featured Ron’s vast and successful career in 2014 in an interesting article titled, “Grounded in Aviation Law.” Ron is listed as a top rated aviation lawyer in Super Lawyers and he caught the attention of the magazine’s editor. Ron reminisces the early days of his career, serious, funny and odd moments in the courtroom, and his representation of Melvin Belli (a prominent trial lawyer who passed way in 1996) for the wrongful death of his dog. 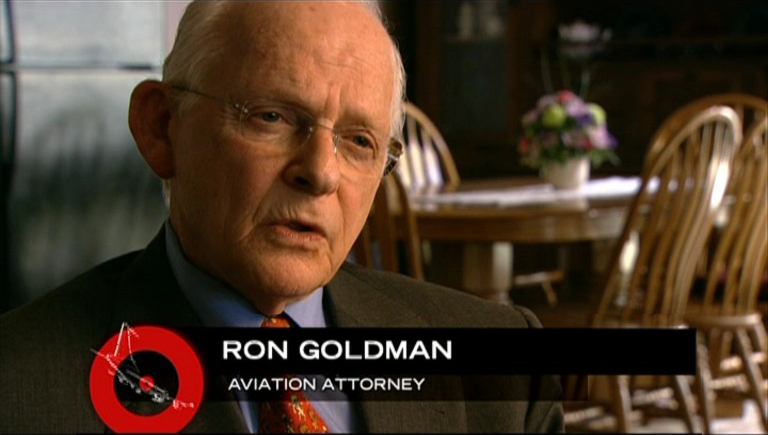 Throughout his care, Ron has appeared more than 2,000 times in the media to offer his opinions and insights on aviation law and a host of other legal issues. He made numerous TV, radio, and print media appearances as a legal expert for Good Morning America, NBC Nightly News, ABC World News Tonight, CNN, Bloomberg News, Chicago Tribune, Forbes.com, Fox News Channel, The Guardian, Los Angeles Times, MSNBC, National Law Journal, NPR, Associated Press, the Washington Post, and countless others.

Ron’s successful track record extends beyond aviation. Following a 2004 truck crash in Ohio, Ron assembled a team to litigate a case against Tyson Foods. Ron took the case to trial and won a $7M verdict with $1.5M post judgment interest added after trial. At the time, this was the largest jury verdict of its kind in Ohio’s history.

With extensive experience litigating train accident cases, Ron was chosen as a member of the Plaintiffs’ Steering Committee for the 2008 Chatsworth Metrolink train collision in California, the deadliest train accident in Metrolink’s history. Ron and colleagues successfully represented the families of eight passengers (two fatal and six injured). He also litigated the fatal 2012 Coal Train Derailment in Ellicott City, Maryland.

Ron became an outspoken advocate for train safety improvements, including the implementation of positive train control (PTC). Ron spent years calling for the technology and finally got to see its acceptance and implementation on over 57,000 miles of freight and passenger track.

While relentlessly advocating for his clients, Ron also had a passion to help mentor other attorneys. For over two decades, Ron was an adjunct professor at Pepperdine School of Law, where he created and taught the course on Aviation Accident Law. He also taught courses in Torts, Insurance Law, Legal Writing, and Analysis.

"Ron Goldman had the well-deserved reputation of being an unusually bright, articulate, demanding, caring, and knowledgeable law professor who wanted his students to stretch beyond their comfort level and excel far past the norm. In visiting with alums of Pepperdine University School of Law about their legal education experience, many mention Ron Goldman as having made a lasting impression on them, whether in his Aviation Accident Law class or the Torts class he taught earlier. Mr. Goldman is a scholar/practitioner who is both well-informed and well-prepared to serve the interests of his clients.”

Many years after leaving Pepperdine, Ron still gets messages like this from his former students who are now successful lawyers:

41 years ago, I took a class from you at Pepperdine Law School in aviation accident law. I remember the many things you taught in that class. I am writing to tell you I appreciate the time you spent sharing with students who knew nothing…You are a giant in the law. Thank you. -- Steven R. Young, Esq.

Ron selflessly states that his greatest accomplishment is “knowing that I have helped people who were in extreme need – individual stories of those who lost loved ones, were catastrophically injured, or whose lives were terrified by the criminal justice system.”

As he turns the page to a new chapter in life at the age of 85, Ron is most looking forward to traveling and spending time with his family, including his children and grandchildren.