The apparently endless variety of IVC filter complications stem from the role that the inferior vena cava plays in the circulatory system and its location in the body relative to several critical organs.

IVC filter complications stem from one of three major types of filter malfunctions:

The inferior vena cava is a large vein that carries deoxygenated blood from the lower body to the heart. From there, the heart pumps the blood through the pulmonary arteries to both lungs. So if an IVC filter moves or fractures, the filter or one of its broken struts (the legs that hold the filter to the walls of the IVC) may be carried to the heart (right atrium and right ventricle), pulmonary arteries or lungs and lodge itself there.

This process is known as migration or embolization—a medical term for the movement of a mass through a blood vessel to lodge somewhere else in the body.

Many of the most severe IVC filter complications involve migration of the filter or the embolization of one or more filter struts that have fractured and separated from the device. In December 2013, the European Journal of Vascular and Endovascular Surgery published an article on the death of a 60-year old man as a result of the embolization of an IVC filter to the patient’s right atrium.

The March 2015 issue of the Journal of the American College of Cardiology describes the case of 64-year old may who was admitted to the hospital complaining of chest pain. A filter strut had embolized to the right ventricle and punctured the pericardium (the sac that encloses the heart), causing it to fill with fluid. Heart surgery was required.

Penetration of the Inferior Vena Cava

The inferior vena cava is close to the spine and several other internal organs. 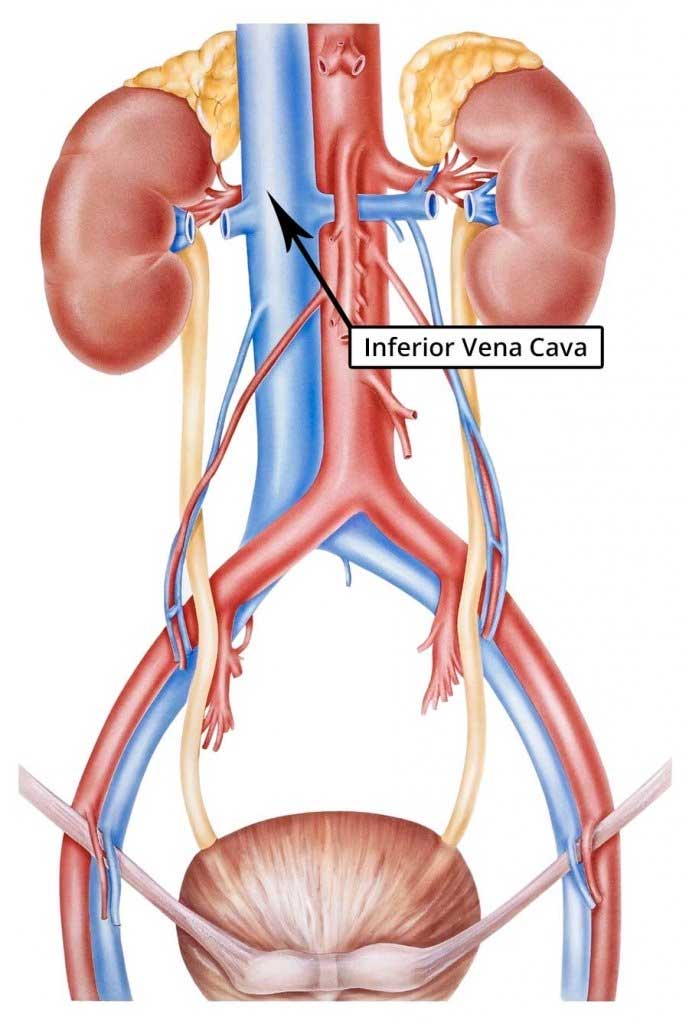 This is important because the IVC filter struts frequently penetrate the walls of the inferior vena cava and come into contact with internal organs near the vein.

A 2009 review of the medical literature published in the International Journal of Angiology found that penetration of the inferior vena cava has been linked to injuries of the:

If you or a loved one has been injured by an IVC filter, or is under threat of injury, the IVC filter team at Baum, Hedlund, Ariseti & Goldman would like to hear from you. Call (855) 948-5098 today.

In addition to the problem of filter migration, embolization of the struts and penetration of the IVC, there is an additional complication: the blockage or occlusion of the filter due to blood clots being captured by the filter or forming as a result of filter placement. According to a February 2013 study in Vascular Medicine, placement of an IVC filter may promote the formation of blood clots. “Occlusion of IVC filters remains their most frequent complication,” the authors wrote.

One of the best sources of information about IVC filter complications is within a database maintained by the U.S. Food and Drug Administration known as the Manufacturer and User Facility Device Experience (MAUDE) database. Researchers use this database to study problems associated with the filters.

Federal law requires manufacturers and importers of medical devices, as well as medical facilities (such as hospitals, ambulatory surgical centers, nursing homes and outpatient clinics), to let U.S. Food and Drug Administration (FDA) know when they have learned of significant problems associated with a medical device.

They must file reports and those reports, along with the information contained in them, are then stored in the MAUDE database. Sometimes voluntary reports are also filed by health care professionals and consumers.

Perhaps the most important element to realize about the reports in the MAUDE database is that each report involves either death, serious injury or malfunctions that “would be likely to cause or contribute to a death or serious injury” if these defects were to occur again.

“He allegedly experienced worsening pain and discomfort as fragments of the filter ‘became embedded in the tissue throughout his body.’ Decedent allegedly took his own life…after being ‘unable to find relief from constant pain.’”

-From a MAUDE database report submitted to the FDA on October 22, 1015.

In 2014, doctors in Northwestern University’s Department of Radiology published the results of their investigation into IVC filter incident reports contained in the MAUDE database. They searched the database for adverse events that had been reported between January 2009 and December 2012 and found 1,606 such events involving 1,057 IVC filters. 1,394 events involved retrievable filters, those that are meant to be removed as soon as there is no longer a need, and 212 were tied to permanent filters. Not surprisingly, the filing of an IVC filter lawsuit is most often tied to the retrievable type filters.

Out of 1,606 adverse events reported, the researchers found the following complications:

As mentioned above, the limbs of the IVC filter may pierce through the inferior vena cava and come into contact with nearby organs. The Northwestern doctors found 28 cases in which the device had penetrated into the duodenum or small bowel, 14 cases of penetration into the aorta, and 12 cases of penetration into structures adjacent to the IVC, including vertebral bodies and disks—nine producing bleeding.

A recent IVC filter lawsuit has alleged (backed by autopsy findings) that the filter pierced the inferior vena cava, causing internal bleeding which led to a woman’s death.

In another IVC filter lawsuit, a Mississippi man alleges that the filter perforated the inferior vena cava and was leaning against the abdominal aorta—the blood vessel that supplies oxygenated blood to the organs around the abdomen and pelvis, as well as to the legs. The position of the device made it too dangerous to remove.

MAUDE database report submitted to the FDA on November 3, 2015:

“Event description: It was reported that approximately five years post vena cava filter deployment; an inferior vena cava gram performed allegedly demonstrated a detached limb in the right kidney, with two filter limbs penetrating the IVC wall. There was no report of an attempt to retrieve the filter or detached limb was made. Approximately six years post vena cava filter deployment an open surgical procedure was performed to remove the filter; reportedly four filter limbs had perforated the IVC wall. The filter was removed successfully….possible complications include, but are not limited to, the following: perforation or other acute or chronic damage of the IVC wall…. All of the above complications have been associated with serious adverse events such as medical intervention and/or death.”

Information in the database suggests that certain IVC filter complications are more closely associated with one brand than another, perhaps due to filter design. The Northwestern University study authors found that fracture of the filter device was most commonly reported in Bard filters. They also noted that filter fracture and migration were cited as reasons the Bard Recovery and G2 filters were removed from the market. Penetration of the IVC by the filter limbs was most common with the Cook Celect filter, which has been reported in the medical literature to have a rate of IVC penetration of 86.1%. Placement malfunctions were associated more with the OPTEASE and Cook Günther Tulip filters.

It is impossible to know how many reports should have been filed with the FDA, but were not. The FDA has claimed that there is a “potential under-reporting of events.”

The Northwestern doctors present data that helps shed light on the under-reporting of IVC filter complications. They estimate that about 800,000 filters were placed in the United States during the time period of their study, but “only 1,057 filters were reported to the MAUDE database with complications.”

These figures stand in stark contrast to the complication rates that are reported throughout the medical literature. For example, a 2015 study published in the journal Circulation reviewed the results of 88 clinical studies and 112 case reports involving 9,002 patients and 15 types of IVC filters. They reported an IVC penetration (see table above) rate of 19% (1,699 patients), with “major complications” reported in 83 patients.

As the medical literature and the MAUDE database show, IVC penetration is just one of the many types of IVC filter complications.

If you or a loved one has been injured by an IVC filter, or is under threat of injury, the IVC filter team at Wisner Baumwould like to hear from you. Please contact our firm for a free consultation.