We are no longer accepting Medtronic medical device cases.

A California state court judge ruled in favor of a California resident represented by Wisner Baum, allowing her lawsuit against Medtronic to move forward. This is good news for patients across the country who received the Medtronic INFUSE® Bone Graft medical device procedure in an off-label manner, not approved by the FDA.

What is Medtronic INFUSE Bone Graft? 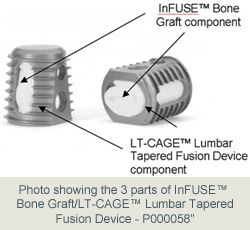 The FDA approved Infuse Bone Graft Device in 2002 for a limited type of spinal fusion surgery to alleviate severe back pain. Infuse Bone Graft Device is a liquid substance produced by a genetically engineered Chinese hamster ovary cell line. It is a recombinant bone morphogenetic protein (“BMP”) that is supposed to stimulate controlled bone growth and fuse the vertebrae.

Medtronic has been under scrutiny for years now concerning allegations of illegal off-label promotion and use of Infuse Bone Graft Device, financial conflicts of interest by researchers, under-reporting of complications and overblown reports of superior clinical results. About 85% of Infuse use is off-label according to MedPage Today.