The UH-60 Black Hawk is a twin-engine, four-blade helicopter that entered service in the United States Army in 1979. While the Sikorsky UH-60 has since become a workhorse for the Army, Navy, Air Force, and Coast Guard, crashes happen every year, causing severe injuries and deaths.

Under the Feres Doctrine, the U.S. government has sovereign immunity from lawsuits filed by military service members and their families. However, Army Soldiers or other military personnel, and their families may be able to pursue a claim against government contractors if defective design, manufacturing, or maintenance failures caused or contributed to a military aviation accident.

If you or a family member have been harmed in a Black Hawk helicopter accident, it is in your best interest to speak with an experienced military lawyer to discuss your potential case. Wisner Baum’s lead military attorney Timothy A. Loranger is a U.S. Marine Corps. veteran who has successfully resolved numerous military accident cases, resulting in significant compensation for his clients. These legal victories not only amounted to monetary recoveries; they also sent a strong message to government contractors—if you cut corners on safety and endanger the lives of military service members, you will be held responsible.

If you or a family member were harmed in a military helicopter crash and would like to speak with an experienced lawyer about your case, please contact us or call (855) 948-5098 today.

The Sikorsky Black Hawk Helicopter has seen heavy use in the U.S. military since the late 1970s. When the UH-60A entered service, it replaced the Bell UH-1 Iroquois helicopter as the Army’s tactical transport helicopter.

Sikorsky subsequently developed the UH-60L and the UH-60M utility variants, and other branches of the Armed Forces went on to use modified versions of the UH-60. More than 4,000 Black Hawk helicopters are in service today in the U.S. and 28 other countries. The U.S. Army is the largest Black Hawk helicopter operator globally, with 2,135 in its fleet.

The UH-60 and its military variants have crashed many times over the years. Between 1981 and 1984, Black Hawk helicopters crashed 16 times, killing 22 people. In 1985, the U.S. Army briefly grounded the Black Hawk after six crashes over four months caused 15 deaths. The most serious crash of the time, a March 13, 1985 crash at Fort Bragg, killed eight soldiers and four crewmen.

Decades later, concerns about Black Hawk helicopter safety remain. According to crash data, between December of 2019 and February of 2021, 11 Black Hawk military helicopters crashed worldwide, killing at least 25 people and injuring others.

The accidents below resulted in U.S. military deaths:

January 2021: A New York Army National Guard UH-60 Black Hawk helicopter crashed during a routine training mission, killing all three soldiers on board. A preliminary report cited 911 calls that said “sputtering sounds” came from the engine before the helicopter went down.

November 2020: A UH-60 Black Hawk helicopter crashed during a peacekeeping mission in Egypt, killing five Army soldiers, a French service member, and a Czech service member. According to reports, a “technical failure” caused the crash.

August 2020: Two Army soldiers died, and three others sustained injuries when their Black Hawk helicopter crashed during a training exercise off the coast of California.

December 2019: A UH-60 Black Hawk from the Minnesota Army National Guard Army Aviation Support Facility crashed shortly after taking off for a routine maintenance test flight. Three men on board died in the crash.

Aviation attorney and USMC veteran, Timothy Loranger, commenting about the military investigation report of a Black Hawk helicopter crash that killed three members of the National Guard in 2019.

In January of 2021, the U.S. Army published Flightfax data highlighting UH-60 accidents and incidents. The report indicated that between 2016 and 2020, UH-60 helicopters were involved in 160 total mishaps. Of those, 18 were considered “Class A” resulting in at least $2 million in property damage and/or death or permanent disability of personnel. The total cost of the 160 mishaps: 18 fatalities and more than $368 million in damage.

In February of 2021, Senator Kristen Gillibrand (D-NY) sent a letter to Defense Secretary Lloyd Austin calling for an inquiry into the slate of recent Black Hawk crashes to “determine if they fit a larger pattern of malfunction with the UH-60 Black Hawk helicopter.”

In her letter, Sen. Gillibrand pointed out that in the case of the 2019 Minnesota National Guard crash, the UH-60’s number one engine failed during a maximum-power check at a time when the helicopter’s number two engine was idling. This failure led to a situation where neither engine provided power to the helicopter’s main rotor system. According to the crash investigation, an incorrect installation of the engine’s hydromechanical fuel control unit caused the failure.

The letter further noted that the crashes in Idaho and New York were being investigated as “disparate events,” even though three Black Hawk crashes within a year “raises significant concerns about a systemic issue with the Black Hawk helicopter operation cycle.”

The law firm of Wisner Baum has decades of experience litigating aviation accident cases, including those on behalf of military service members. Our firm has represented clients in cases involving Sikorsky Black Hawk helicopters. We know what it takes to win cases against the world’s leading aviation companies. Across all areas of practice, Wisner Baum attorneys have earned more than $4 billion in verdicts and settlements.

Lead military lawyer Timothy A. Loranger is a pilot and Marine veteran who worked as an aircraft mechanic during his years of service. This experience is an asset in aviation accident investigations involving military aircraft where the claimant must prove that mechanical failure or maintenance negligence on the part of a government contractor caused or contributed to a military accident.

Some of Tim’s legal awards and accomplishments include: 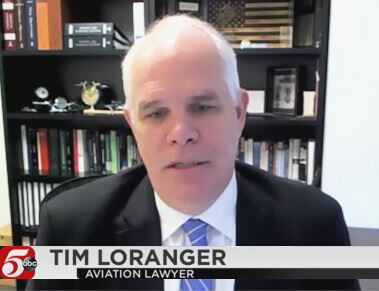 Our legal team is available to discuss your case with you at any time. Please contact us by phone at (855) 948-5098 or fill out our contact form.