Glyphosate (or N-phosphonomethyl-glycine) is one of the world’s most widely used broad-spectrum herbicides, accounting for roughly 25 percent of the world herbicide market. Glyphosate herbicide is widely utilized in agriculture because it is a cost-effective, easy to use compound that kills weeds, especially annual broadleaf weeds and grasses competing with crops. While it is true that glyphosate products are mostly used in agriculture, some countries also use glyphosate herbicide to control unwanted weed growth in forestry, gardening and in non-cultivated places, like industrial areas and along highways.

How Does Glyphosate Herbicide Work?

As a non-selective herbicide (affecting a broad spectrum of weeds indiscriminately), glyphosate works by blocking an essential pathway for plant growth. Once absorbed by the plant, glyphosate binds to and blocks the activity of an enzyme called enolpyruvylshikimate-3-phosphate synthase (EPSPS). The EPSPS enzyme comes at the start of the shikimic acid pathway. By blocking this pathway, the plant cannot create certain proteins that are needed for growth. 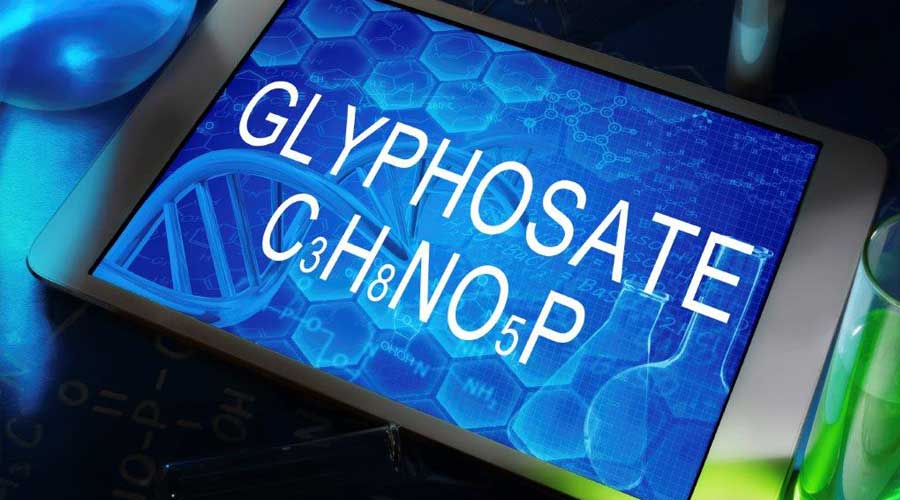 How Can I Be Exposed to Glyphosate?

Scientists have been able to correlate a number of health issues related to glyphosate exposure, including, but not limited to:

ADHD: The journal Environmental Health Perspectives reported in 2002 that exposure to Roundup [glyphosate herbicide] was linked to attention deficit disorder (ADHD), likely due to the herbicide’s capacity to disrupt thyroid hormone functions.

Alzheimer’s Disease: A study published in the journal Toxicology found that glyphosate exposure can cause the same kind of oxidative stress and neural cell death found in Alzheimer’s diagnosis. It also affects CaMKII, an enzyme whose dysregulation has also been linked to Alzheimer’s.

Autism: A research scientist at MIT says exposure to glyphosate has a number of biological effects that align with known pathologies associated with autism. One of the parallels is gut dysbiosis among children with autism and glyphosate’s suppression of pathogenic bacteria. Glyphosate also promotes the accumulation of aluminum in the brain. Aluminum is a neurotoxin and the established cause of dialysis dementia.

Birth Defects: Glyphosate exposure can disrupt the Vitamin A signaling pathway, which is critical for normal fetal development. A study from Paraguay found that babies born to women living less than a mile from fields sprayed with glyphosate herbicide were more than twice as likely to develop birth defects.

Cancer: The International Agency of Research on Cancer (an agency within the World Health Organization) published a study in 2015 that determined glyphosate is a probable human carcinogen. There is also a meta-analysis study from 2014 published in International Journal of Environmental Research and Public Health and a2008 Swedish study that link glyphosate and non-Hodgkin lymphoma. Other studies, including a study in Argentina of 65,000 people in farming communities where Roundup is used (communities referred to as “the fumigated towns”), found cancer rates to be two to four times higher than the country’s national average. Specifically, the study noted increases in breast, prostate and lung cancers. In a comparison of two farming communities—one that sprayed Roundup and another that didn’t—31 percent of residents in the Roundup sprayed community had a family member with cancer. In the community that didn’t spray, only three percent of residents had a family member with cancer.

Celiac Disease: A study of fish exposed to glyphosate herbicide showed that some developed digestive problems similar to those with Celiac Disease. Parallels between glyphosate exposure and Celiac Disease include impairment in enzymes critical to detoxifying environmental toxins, imbalances in gut bacteria, amino acid depletion and certain mineral deficiencies.

Colitis: A Roundup study titled ‘The Effect of Glyphosate on Potential Pathogens and Beneficial Members of Poultry Microbiota in Vitro’ found that glyphosate toxicity could be a significant predisposing factor in the overgrowth of clostridia, an established causal factor in colitis.

Heart Disease: A study published in Entropy found that glyphosate exposure can cause disruption to the body’s enzymes, causing lysosomal dysfunction, which is a factor in heart failure and cardiovascular disease.

Inflammatory Bowel Disease: In the same Entropy study, researchers found that exposure to glyphosate creates a severe tryptophan deficiency in some, which can cause inflammatory bowel disease.

Kidney Disease: Glyphosate herbicide exposure may explain the recent spike in kidney disease statistics among farm workers in India, Central America and Sri Lanka. According to the International Journal of Environmental Research and Public Health: “Although glyphosate alone does not cause an epidemic of chronic kidney disease, it seems to have acquired the ability to destroy the renal tissues of thousands of farmers.”

Non-Hodgkin Lymphoma: A paper analyzing nearly 30 years of research on the relationship between Non-Hodgkin Lymphoma (NHL) and occupational exposure to pesticides found a positive association between glyphosate herbicide exposure and B cell lymphoma.