Armored trucks and armored cars transport money and other valuable assets for countless businesses. With such an emphasis on safety, security, and protection, you might think armored truck companies spare no expense in maintaining vehicles in their fleet or hiring only the most professional drivers in their employ. Unfortunately, some trucking companies cut corners when it comes to safety, opening the door to catastrophic accidents.

When an armored truck accident happens, victims face numerous challenges: How will I pay my medical bills? What if I have to miss work for an extended time? Will this affect my insurance coverage? Can I get compensation for my damaged car?

If you are an accident victim facing such questions, you need a truck accident lawyer with experience litigating cases against armored truck companies. The truck accident attorneys at Wisner Baum have decades of experience advocating for victims of car and truck crashes in Los Angeles, across California, and all over the United States. Our legal team includes board-certified attorneys with a track record of success against many of the nation’s leading trucking companies. With more than $4 billion in verdicts and settlements won for our clients, we know what it takes to win big cases against big companies, including Garda.

Our firm successfully represented armored truck accident victim Gloria “Gigi” Day in a lawsuit against Garda. Mrs. Day sustained severe injuries when a Garda truck lost control and crashed into her Subaru Outback head-on. She suffered several broken bones and endured multiple surgeries before she was able to regain the use of her legs. 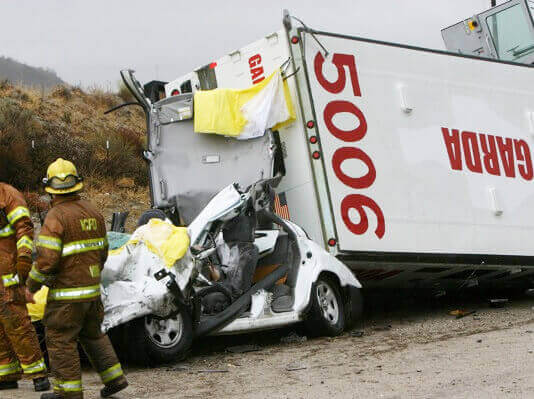 An armored Garda truck caused a head-on crash when it swerved into Gloria Day’s lane Nov. 26, 2008. Her Subaru compressed to the size of VW bug. Rescuers said they didn’t believe anyone could have survived.

After months of legal proceedings, the armored truck accident attorneys at Wisner Baum successfully negotiated a confidential settlement on Mrs. Day’s behalf. Her settlement aided in her recovery from the accident and allowed her to pursue the best possible care after such a traumatic event. 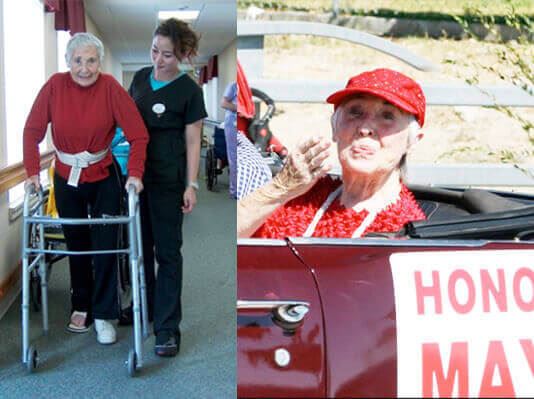 In February 2009 she was able to begin learning to walk with a walker, then in August, 2009, Gloria presided over the 42nd Fiesta Days as Honorary Mayor.

On November 26, 2008 my life changed radically. The impact of a 13 ton armored truck on my car with me in it rearranged my lifestyle forever after. It also created ultimate concern for my family of how to make my life more comfortable from there on out.

In the midst of this concern, my family received information from Wisner Baumoffering guidance and help. And from that point on that was exactly what we got...guidance and help. In the months that followed the tragic accident, through the long hospitalization, the tedious recovery, and after four months, my triumphant homecoming, they were there offering support and fighting with the insurance company for my benefit. Is it possible to become friends with your attorneys? A very decided "yes." When I finally was able to WALK into their offices for a consultation, the admiration and warmth displayed by that bank of attorneys was very much in the realm of friendship.

Finally, the settlement was received, and my "case" was concluded. But through the follow-ups, there was always that sincere concern for my well-being. And even though they are no longer my "legal team," I know that they are still ready to go to bat for me when needed.

Our truck accident case accomplishments include:

Armored trucks require specialized training and skills to operate safely. Why? For starters, trucks are much heavier than passenger vehicles, so they need more time to stop when compared to a car driving at the same pre-braking speed. Additionally, armored trucks typically use air brakes, which have a delayed response following pedal depression not found in cars. Armored trucks also have reduced visibility and line of sight when compared to passenger vehicles.

Other common causes of truck accidents include:

Whatever the crash cause, armored trucks pose more of a risk of causing serious personal injury, wrongful death, or property damage when compared to a collision involving a passenger vehicle, even when the impact seems less severe to the untrained eye. The differences between a truck accident and a car accident highlight the importance of retaining legal counsel with experience investigating and litigating truck accident lawsuits, which are more complex. Our firm has decades of experience litigating truck cases involving:

Who Can I Sue in an Armored Truck Accident?

Some examples of liability in an armored truck crash include:

Operations worldwide include more than 1,000 facilities and 13,300 cars and trucks. In 2018, Brinks acquired a leading competitor, Dunbar, for $520 million. At the time, Dunbar was the fourth largest armored truck company in the U.S.

The latest crash statistics for Brinks shows its truck have been involved in 141 crashes. In December of 2020, a Brinks armored truck and a passenger car collided outside of Carthage, North Carolina, killing a woman driving the car and injuring the Brinks truck driver.

When a heavy truck collides with a passenger vehicle, the car occupants often suffer severe injuries or are killed.

Below we profile Brinks FMCSA safety and Out-of-Service % (OOS) ratings against the national average, along with crash data. A satisfactory rating means the company may have functional and adequate safety management controls to meet minimum safety fitness standards.

GardaWorld is a private security firm headquartered in Canada. The company is one of the largest armored car and truck companies operating in the United States. Garda has nine subsidiaries operating in various parts of the country:

In 2020, the Tampa Bay Times published an exhaustive investigation highlighting years of Garda accidents that could have been prevented. According to the report, since 2008, 19 people have died in accidents involving Garda armored trucks. Twelve of those accidents were caused by either mechanical issues (brake and steering problems in particular) or driver error in which fatigue may have played a role.

The investigative report noted that upper management at Garda was aware of safety issues with the companies armored trucks but allowed the trucks to continue operating without intervention.

In 2018, a truck accident lawsuit against Garda sought $100 million in damages after one of the company’s trucks crashed into a motorcyclist. The Garda lawsuit alleged the truck driver made an illegal left turn before striking and killing the motorcyclist.

According to government data, Garda operates a fleet of nearly 2,000 armored cars and trucks, and employs over 3,000 drivers in the U.S. In a recent 24-month period, Garda armored trucks were involved in 103 crashes, including 60 that resulted in injury and four that resulted in death.

Below we profile each Garda subsidiary’s FMCSA safety and Out of Service % (OOS) ratings against the national average along with crash data. A satisfactory rating means the company may have functional and adequate safety management controls to meet minimum safety fitness standards. A conditional rating means the company does not have adequate safety management controls in place to ensure compliance with the safety fitness standard.

Loomis is a cash handling company based in Sweden that operates in Europe and the United States. The ‘Cash in Transit’ armored car and truck side of the business accounts for roughly 61% of Loomis’ 2020 revenue. Loomis armored trucks transport cash to and from banks, stores, and automatic teller machines (ATMs). Among other things, Loomis collects daily receipts and supplies retailers and banks with change and currency.

In December of 2017, a Loomis truck driver reportedly disregarded a traffic light and struck a passenger vehicle. The occupant of the car, a Georgia woman, sustained severe injuries in the accident. The woman filed a Loomis truck accident lawsuit, alleging the company’s driver was negligent in operating the vehicle, and Loomis was negligent in hiring, training, and supervising the driver.

In 2020, a Georgia jury awarded the woman over half a million dollars in damages. Both Loomis and the driver admitted fault in the accident.

According to government data, in a recent 24-month period, Loomis armored trucks were involved in 91 accidents, including 37 resulting in injury and two resulting in death.

Below we profile Loomis FMCSA safety and Out-of-Service % (OOS) ratings against the national average, along with crash data. A satisfactory rating means the company may have functional and adequate safety management controls to meet minimum safety fitness standards.

Do I Need An Armored Truck Accident Attorney?

Armored truck companies like Brink’s, Garda, and Loomis will go to great lengths to limit their liability or avoid liability altogether when one of their vehicles is involved in an accident. How do they do this? First, they may try to take advantage of crash victims by offering a settlement offer that would pale in comparison to what the victim might receive if he or she hired a truck accident lawyer and pursued their claims in court. Alternatively, the company may use its vast resources to mount the strongest possible case in an attempt to defeat or minimize your claim.

Retaining an experienced truck accident injury lawyer is your way of leveling the playing field. Wisner Baum’s truck accident attorneys know how to conduct a thorough investigation, determine fault, professionally present your case for settlement or trial, and thereby maximize your compensation. It has the resources and experience to fight for your rights and maximize your probability of receiving fair compensation for your losses, pain and suffering. When you sustain severe injuries in an accident, your priority should be restoring your health. Let our accident lawyers fight your legal battle so you can focus on getting well.