For over 40 years, our attorneys have dealt with very difficult aviation crash cases of all types, including multiple mid-air collisions. A mid-air collision is often fatal to the occupants of one or both planes and can lead to extremely complex litigation. Since a mid-air collision potentially involves two pilots, two aircraft, two flight plans, multiple maintenance providers, along with possibly multiple owners, operating companies and more, it is easy to see how difficult these cases can be.

Discovering the true cause of these terrible accidents and holding the responsible parties accountable requires the assistance of attorneys who are both knowledgeable and experienced in all aspects of aviation law. 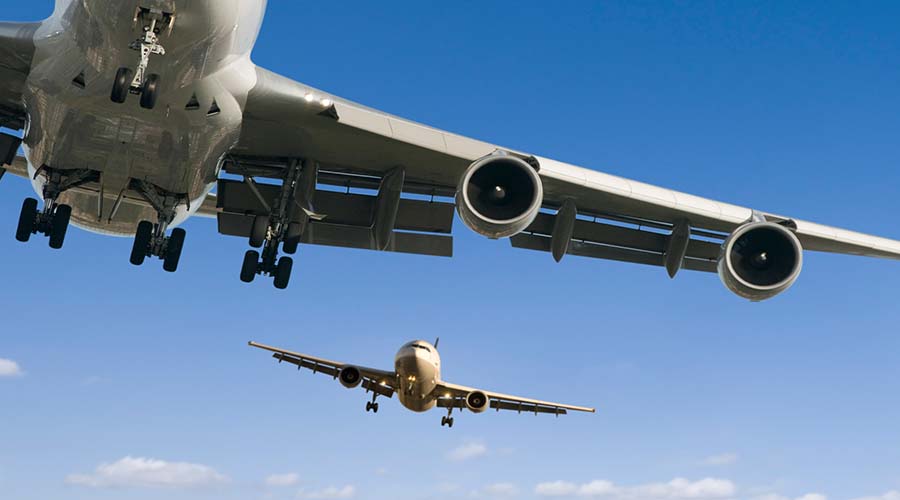 How Often Do Mid-Air Collisions Happen?

Mid-air collisions tend to happen with smaller planes. Larger planes that carry hundreds of people have specific flight paths that are scheduled and tracked by the airlines and air traffic controllers. Smaller planes and helicopters that are operated for personal use, training, or in small commercial enterprises, such as sightseeing tours, are far more likely to experience an in-flight collision. This is due to the fact that these smaller planes may be less aware of one another than larger planes and do not necessarily have set schedules or firm flight paths. Many smaller planes can be operating under visual flight rules and may not necessarily see another aircraft until it is too late. Over 80 percent of all mid-air collisions occur when one plane tries to overtake another, often during final approach.

Additionally, certain areas are more prone to having two aircraft collide, such as popular tourist destinations or plane and helicopter training areas. When a large number of personal aircraft are in the air the potential for a mid-air collision increases.

For example a tour helicopter and a private plane collided over the Hudson River in 2009. This mid-air collision was attributed partly to an air-traffic controller taking a personal phone call that prevented him from performing his duties. The opportunity to see the New York skyline from a helicopter is a unique and exciting thrill, but can be very dangerous when you consider how many aircraft are able to fly in the Hudson River VFR Corridor, which is airspace that uses only visual flight rules, without scheduled flight plans or air traffic controllers involved. Beyond the many helicopter touring companies, there are numerous people who own their own private helicopters or planes as well as over 30 airports or heliports, three of which are large international airports, all fighting for the limited airspace over the populous City of New York.

What Causes a Mid-Air Collision?

The so called “see and avoid” rule in the Federal Aviation Regulations requires every pilot to remain vigilant at all times while operating an aircraft, “So as to see and avoid other aircraft.” It then lays down certain “rules of the road” that govern who has the right of way when two airplanes are approaching head-on, converging, overtaking and landing.

Very often, a mid-air collision involves one or more pilots violating one or more of those rules. Application of these rules can be quite complex because factors such as speed, weather, restrictions on vision, and limits on human ability may well challenge easy conclusions.

Mid-air collisions are always the result of at least one aircraft operator being unaware of the presence of another aircraft in its vicinity. However, the parties responsible for providing that knowledge can change from incident to incident. If a plane is told to land on the same runway from which another plane taking off, then the mid-air collision may be the result of air-traffic controller negligence. If a company fails to properly train its pilots to be aware of other aircraft or ground its flights during times of low visibility, the accident may be traced back to corporate negligence. However, the vast majority of mid-air collisions involve small personal planes or helicopters, otherwise known as general aviation aircraft.

The important thing to remember about a mid-air collision is that no pilot or plane type is immune. An inexperienced pilot may forget to keep an eye out for other aircraft, while an experienced pilot may have traveled the same route so many times, they are not paying as much attention to unexpected changes. Even with air traffic controllers and pilots on the lookout, with planes moving toward each other at high rates of speed, it can be difficult for people to respond in time to prevent an accident.

According to the FAA, while flying it is easy for a pilot to develop empty-field myopia—where the lack of surrounding objects to focus on, leads to the eyes not focusing on anything, even if it does enter the field of vision. Another common issue for pilots is tunnel vision, where objects in peripheral vision are ignored. Additionally, environmental effects such as glare from the sun or flying over a densely populated area with lots of buildings can camouflage a nearby aircraft until an accident is unavoidable.

At Wisner Baum, we are committed to thoroughly investigating aviation accidents and pursuing litigation against those who acted negligently.

If you or a loved one has been harmed by a mid-air collision or any other type of aviation accident, please, speak with an experienced lawyer at Wisner Baum.

Cessna 130P and Cessna 172N Collision — On May 18, 2009, while performing practice turns in a common practice area about five miles south of the Long Beach Harbor in California, a flight training plane occupied by an instructor and student was hit by another plane, operated by a certified airline transport pilot. The resulting crash killed all three occupants of the two Cessna planes.

Cessna 172N and Cessna 150M Collision — On January 20, 2008, after one Cessna turned and entered the traffic pattern to land on a runway at Corona Municipal Airport in Corona, California, it collided at a perpendicular angle with another Cessna that had just taken off from the same runway. Both pilots and their passengers, totaling in four people, were killed during the accident. An additional person on the ground was also killed by falling debris.

Piper PA-28-180 and Piper PA-44-180 Collision – On March 7, 1996, a privately registered Piper PA-28-180 and a Piper PA-44-180 registered to Phoenix East Aviation, Inc., collided in flight. The planes were approximately 600 feet above sea level and around one-quarter of a mile offshore of Flagler Beach, Florida. Both flights took off from the Daytona Beach Regional Airport in Florida and both aircraft were destroyed. The pilot and three passengers on the privately registered Piper—which was on a sightseeing flight—and the certified flight instructor and pilot-rated student on the Phoenix East Piper all died in the collision. A witness reported that neither pilot took evasive action before the collision. Both planes plummeted into the water after the collision. The NTSB blamed the crash on the failure of both pilots to maintain visual lookout and avoid conflicting traffic.

Cessna 182R and Cessna 170A Collision – On February 24, 1996, a Cessna 182R and a Cessna 170A collided approximately 1,000 feet above the ground in Proctor, AR. All four people died in the collision. Witnesses said the two planes were traveling in opposite directions on a collision course. Both planes banked to the left to avoid a collision but were unable to do so. After the planes collided, they descended to the ground, ultimately coming to rest nose-down approximately one-half mile apart. A pilot who witnessed the collision said there was no glare from the sun setting and visibility was estimated at more than 20 miles. The NTSB blamed the crash on the failure of the pilots to see and avoid the other plane.

Beech A36 and Stinson 108-2 Collision – On February 19, 1989, a Beech A36 Bonanza and a Stinson 108-2 collided midair above Glen Falls, NY, killing six people. The Bonanza had just taken off from Warren County airport and had turned right while beginning its climb at the same time the Stinson was returning to the airport. The planes collided approximately one mile north of the uncontrolled airport. The NTSB attributed the crash to failure of both pilots to see and avoid each other. Related factors included failure of the Beechcraft to make a normal left turn out of traffic and glare from the sun affecting the Stinson pilot’s visual perception.

McDonnell-Douglas DC-9 and Piper PA-28-181 Archer Collision – On August 31, 1986, a McDonnell-Douglas DC-9 operating as Aeromexico Flight 498 was clipped by a Piper PA-28-181 Archer during its descent into Los Angeles International Airport. Both planes plummeted from the sky, crashing in the Los Angeles suburb of Cerritos. All 67 individuals aboard both planes were killed as were 15 people on the ground. Two individuals on the ground suffered severe emotional distress, including post-traumatic stress disorder, even through not physically struck by debris from the crash. Investigators placed equal blame for the crash on the Federal Aviation Administration (FAA) and the pilot of the Piper.

Boeing 727-214 and Cessna 172 Collision – On September 25, 1978, A Boeing 727-214 operating as Pacific Southwest Airlines Flight 182 collided with a Cessna 172 over the San Diego neighborhood of North Park. All 137 people aboard both planes were killed in the mid-air collision, along with seven people on the ground. The NTSB found that the crash was probably caused by the failure of the Pacific Southwest Airlines flight crew to properly follow air traffic control procedures.

For immediate assistance with any kind of aviation disaster or to schedule a free consultation or case evaluation with an experienced aviation accident attorney, please contact Wisner Baum.